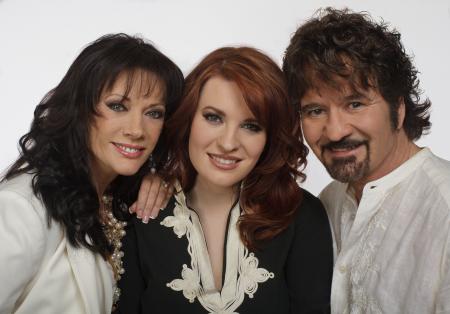 Rambo McGuire does not have any upcoming events.

Dony McGuire & Reba Rambo-McGuire are award-winning Gospel singers, songwriters, recording artists, producers, ministers, and pastors. Their songs have been performed by some of the most famous artists; their recordings have garnered prestigious nominations and honors including Grammy and Dove awards. Their unique blend of contemporary, rhythm & blues, praise & worship, country, folk, and bluegrass music appeals to a wide variety of audiences. They have performed all over the world from storefront churches to the largest concert stages, before presidents and kings, battle-worn military troops, maximum security prisons, college campuses, and billions of viewers of Christian and mainstream television including The Grammy Awards, receiving one the longest standing ovations in the show’s history.

Both Dony & Reba come from a rich musical family heritage. At the age of thirteen, Reba Rambo began traveling with her parents, Buck and Dottie Rambo, in the legendary southern Gospel music group, The Rambos. As a young boy, Dony McGuire toured with his four brothers and many popular Gospel singing groups before joining The Downings. They both launched solo careers in the late ‘70s becoming trendsetters in contemporary Christian music before joining forces as Rambo McGuire.

Rambo McGuire’s latest CDs include The Noteworthy Collection, a newly remastered project featuring 20 of their most requested songs, and The Lady’s Treasury, a limited edition CD highlighting 10 of Reba’s classic recordings with 3 new releases. Returning to their roots, Rambo McGuire recently finished their first full-length recording project since 2000 entitled Grassroots Rambos celebrating the early mountain style of The Rambos and timeless songs of Reba’s mother, Dottie Rambo. They are joined on this project by their children, Destiny Rambo McGuire and Israel McGuire, and founding member of The Rambos, Buck Rambo. This unique project is the first in a series of recordings and concerts Remembering The Rambos. They are also currently being featured in Gaither Homecoming videos and concerts.

Founding member of The Rambos, Buck Rambo, joins the group as often as possible. His expertise in the music business garnered much success for his southern Gospel family group with Dottie and their daughter Reba. While Dottie’s pen wrote many of the hits that made the group popular, Buck’s hillbilly, country twang mixed with Reba’s high, angelic voice and Dottie’s deep alto added a stellar dynamic catapulting them to the top of the charts and to the world’s most renowned concert stages. The Rambos were inducted into the Gospel Music Hall Of Fame in 2001.

The next generation of Rambo McGuire brings its own talent and versatility to the mix. Dony & Reba’s children, Destiny and Israel, traveled for years with their parents performing and developing their unique gifts. Destiny is sought after as a singer, songwriter, musician, dancer, actress, and choreographer. Israel is a Grammy-nominated video director, singer, songwriter, and musician as well. Destiny’s heartfelt vocals and Israel’s rhythmic drumming are an integral part of the dynamic, soul-stirring music of Rambo McGuire.

Dony & Reba are continuing to compose and write songs including their most recent collaboration with Bill Gaither, “Let’s Make A Memory.” Reba’s writings can also be found in most current issues of Bill & Gloria Gaither’s Homecoming Magazine or in Follow The Yellow Brick Road, her book depicting the dramatic account of God’s healing and restoring power in her life. Reba is in the process of completing her second book, a collection of stories behind the songs penned by Dottie Rambo.

Having personally mentored over 36 young ministry interns with “on the road, hands-on training” over the years, Dony & Reba devote a portion of their schedule to teaching creative writing workshops. In these dynamic classes, young and seasoned writers receive practical instruction in the craft of writing songs, stories, sermons, and speeches. Dony & Reba are occasionally joined by other sought after writers of our time such as Bill & Gloria Gaither, David Binion, and Jeff Ferguson in these educational seminars. “I wish someone had taught me these principles and secrets when I was young because it would have shaved years off my creative learning process,” says Reba.

In 2001, Dony and Reba launched The River At Music City Church in the heart of Nashville, Tennessee, where everyone can experience the love of God and be refreshed in His presence. Here they continue to serve as senior pastors and  regularly travel throughout the year for music ministry and speaking engagements.